Should you let him come to you after a breakup? 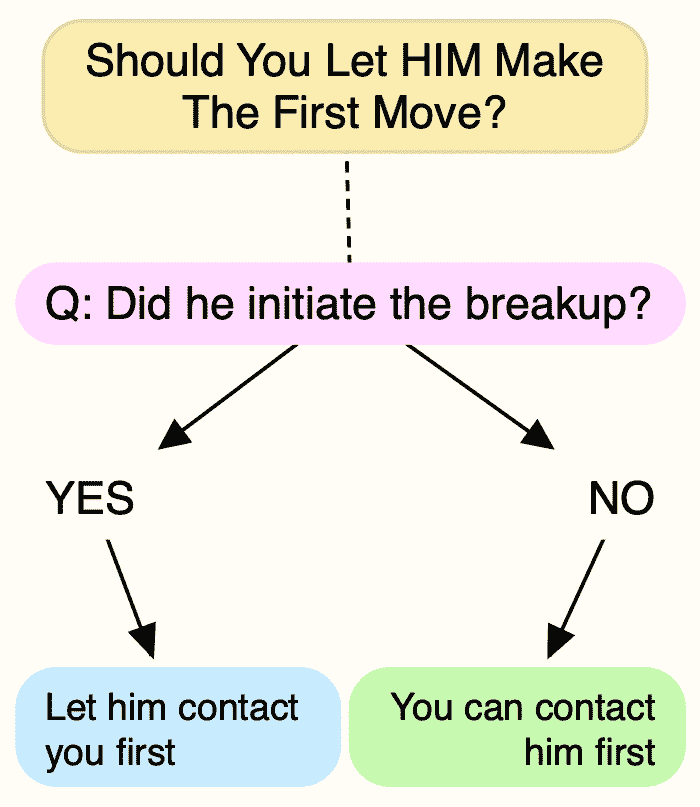 Below I will address both situations further. Let’s start with when your boyfriend finished the relationship.

What to do if your boyfriend broke up with you?

If he broke up with you, it is better to give him a chance to come to you first. Let him decide for himself what he wants without any input from you. He may need a short break. And not hearing from you puts you in a strong position.

Of course, it is possible he just wants to get laid. You should watch out for that. Wait until you are back in a committed relationship before sleeping with him.

What if you initiated the breakup?

If you initiated the breakup, it is not fair or reasonable to expect him to make the first move. Honestly, you should give him a bit of time to blow off some steam and then check in with him. That’s assuming you want him back!

Of course, if you are lucky, your ex-boyfriend will still choose to take control and fight for you. Yes, even if he does not hear from you. And men should be encouraged to take charge!

Be mindful he will need time to vent and space to heal from the breakup. So let him gather his thoughts. He might not be ready to hear that you made a mistake (for example) so soon. If he is still angry, you could find yourself at the wrong end of his anger and turn a bad situation into a catastrophe.

What if you never hear from him again?

While it would be better if your ex initiates contact, that does not mean you can never be the first one to make a move. Listen, I deal in the business of reuniting couples. And honestly, I would have fewer success stories if I told all my female clients never to initiate contact after a breakup. While it is empowering to insist he makes the first move, it is not always the best solution. The fact remains that many couples today would not be together if the woman hadn’t taken control.

Remember, men can be stubborn creatures. Plus, your ex may even feel ashamed or embarrassed about his actions. For that reason, and many others, do this:

Can you guess why your ex is so cold toward you? 🥶

Think for a second.

Your ex could be ignoring you because they’re angry. Right?

Or, maybe it’s just awkward to face you right now…

But, hold fire because…

There is ANOTHER reason, and not many think about it.