My Ex Blocked Me on Everything, What Do I Do?

It’s hard to deal with the aftermath of a breakup. There is always something else you want to say or clear up or explain. OK, but what are you supposed to do if your ex blocks you? And why would they do that? Read on to find out. 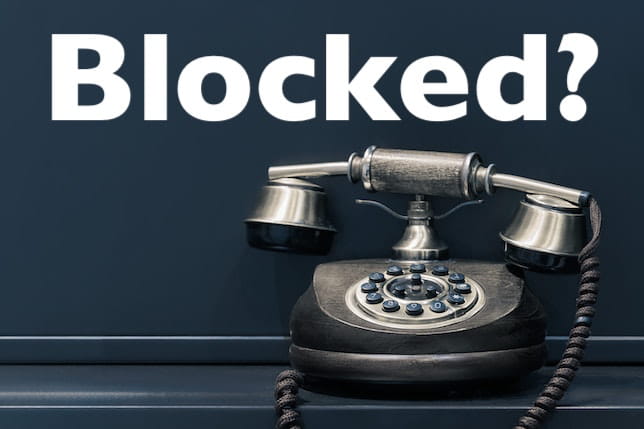 Why Has Your Ex Blocked You?

The simplest reason is your ex does not want to talk to you or is not ready to. Reluctance to talk is normal if your ex is still hurting. In some cases, ex’s use blocking as a way to punish you. Suppose you misbehaved or did something egregious to your ex. In that case, blocking can be both an act of revenge and a way to protect against you. Yes, blocking you could be a way to protect themselves from harassment and stalking (perceived or real.)

Some people block exes because they don’t want their new partner to know about the old relationship. Yes, really.

If your ex blocked you because they’re not ready to talk, there’s a good chance they will unblock you on their own accord. As such, I recommend you wait and give this possibility a chance to come true.

If your ex blocked you because they’re trying to punish you or they have a new partner, you should still give them space.

Put it this way:

If you believe your ex blocked you out of spite, then you already know why your ex is upset. And if the breakup happened recently, all contact attempts will get shot down.

Or, if you know your ex is in a new relationship? You KNOW they will not want the new guy or girl to see your name pop up on their screen. Especially if it has not been that long since you broke up. But later? Either they will no longer be in that relationship (rebounds have shorter lifespans) or they will be less concerned about hearing from you.

Of course, I don’t know how long ago you broke up. So, let’s run through a couple of scenarios:

If you broke up yesterday and your ex is angry or upset, now is not the time for communication. Trying to talk to an angry ex right after the breakup is pointless. It would be like trying to calm an angry swarm of bees. As a result, being blocked on everything is not a big deal. You don’t want to talk to them anyway! Instead, tap into the power of no contact. Work on yourself, and set a reminder to revisit the situation in a couple of weeks.

However, if you broke up a few weeks ago and your ex was angry to start with, but now you are not sure if they have cooled off? Then you have a couple of choices:

What to Say to Your Ex?

Humour and self-deprecation? Yes. If your ex blocked you out of anger and spite, then it is unlikely that they will be in a forgiving mood right now. In this case, humour could be just what the doctor ordered. They may even appreciate you turning the tables on them by agreeing with their assessment of you.

Effective communication requires entering the conversation already in their head. If your ex has less than kind thoughts about you, match the mood with a few unkind words about yourself. However, include some humour so you are not only beating on yourself (as that would be a bad idea.)

For example, you wouldn’t say:

“Hey stranger. You are right —I am an appalling human being with no redeeming features.”

“Hey stranger. Remember me? I’m the appalling human being with no redeeming features. Ha. Well, I did do a pretty good impression of one… 😬 Sorry about that 😵 So, how’s the guitar lessons coming along? I found a cool music shop. It’s practically hidden. And you’d love it…”

You get the idea.

After you send it, hopefully, you will get a response from your ex, and it will be through an unblocked channel.

At this point, do not immediately message them about how much you miss them or try to get back to where you were. Instead, wait a bit and match your reply with theirs.

If your ex blocks you because they are hurt, respect their wishes and give them more time. During this phase, if you need to apologise for anything, take the initiative and do just that.

If your ex blocked you out of anger and spite, then it’s not a big deal. You don’t want to talk to him/her anyway! Instead, get busy following the no contact approach. Work on yourself and set a reminder to revisit the situation in a couple of weeks. After this, if necessary, send an apology. Otherwise, you need to think about HOW to contact your ex. And what to say to break the ice.

When it comes to HOW to contact your ex, draw up a list of the options you have. There is always a way (e.g., postcard.) Pick the least offensive option and run with it.

What you say will always depend on why you broke up and why you were blocked. For your message, if your ex has less than kind thoughts about you, match their mood. Just be sure to wrap your message in humour to protect your pride.

Is Your Ex Having Second Thoughts?

How about I TELL you about the three QUICK signs you can look for, which MIGHT hint your ex is having second thoughts and wants you back?

I’ve put this info in an email. And it’s ready to go straight to your inbox. Just type your email address in the box below, and hit the button.